It said the demolition of such environmental nuisance, which began on Wednesday, would last for good three weeks.

Chairman, FCTA Ministerial Taskforce on City Sanitation, Mr Ikharo Attah, who led the operation alongside the security operatives and officials of relevant departments under the administration, told newsmen that most of the affected worship centres extended their buildings and fence to the road shoulders.

According to him: “Today, we carried out the major operation and cleared illegal structures and others that were extended to the road shoulders and we shifted them back.”

He stressed that all the plots that would be reclaimed at the end of the exercise would be handled by the relevant departments of the administration. 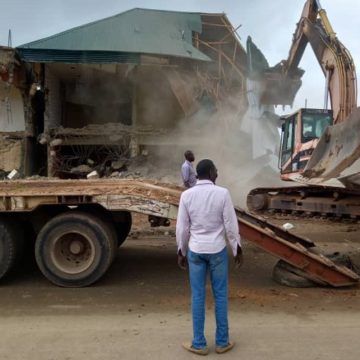 “Ours, as enforcement officers, is to clear the road, remove all the incumbrances, illegalities and once our job is done, we are satisfied that we have done our own part,” he explained.

Also speaking, the Secretary, FCTA, Command and Control Centre, Mr Peter Olumuji, said removing all the shanties is like taking the opportunity away from criminals to hibernate and commit a crime.

A landlord and shop owner, Mr Vincent Victor, who spoke with newsmen, affirmed that none of the occupants of the demolished illegal structures secured approval from the administration before erecting buildings or shanties in the area.

He, therefore, called on the FCT Administration to provide them with an alternative locations to enable them to continue with their businesses.

YOU SHOULD NOT MISS THESE HEADLINES FROM NIGERIAN TRIBUNE

CLAIM: A viral Whatsapp message claims that mobile telecommunications company, MTN, is giving out N20,000 cash, 5GB worth of data, and cars to celebrate its 20th anniversary in Nigeria.

VERDICT: FALSE! To mark its 20th anniversary, MTN, instead, gave all its customers free calls of up to 5 minutes, free 200MB data and promised to give 20 Honda HRVs to 20 customers.